Published by Arcane Wonders and Designed by Jon Perry. Air, Land, and Sea is an excellent fast paced 2 player game, involving lots of strategy and some luck. You have 3 theaters of war, which are depicted by cards that you shuffle and place down in between the 2 players. These are obviously, Air, Land, and Sea. Then you shuffle the 1st and 2nd player cards and pass them out, this determines who goes first and how scoring will be done at the end of the round. The final step is giving 6 battle cards to each player, and boom setup is complete and you are all ready to begin. 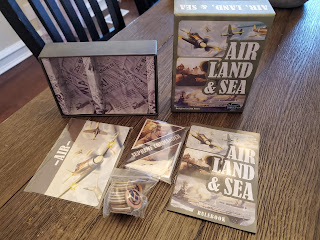 The battle cards are color coded for one of the three theaters of war, either Air (Grey), Land (Green), or Sea (Blue). In the upper left corner of the cards is a strength value that is between 1-6. This contributes to the assigned Theater of War overall score that you use to hopefully beat your opponent. Most cards also have an ability that trigger either instantly (lighting bolt), or ongoing (infinity symbol). These can have a variety of different effects and really change the course of a round.

Let's talk about the flipping cards aspect of the game. Generally only cards with the correct color may be played in each theater, but you also have the choice to play a card face down, these have a default value of 2 strength, and can be played in any theater no matter the color. If a card is flipped over it can drastically change the course of a round. Even if the card flipped is not in the correct theater, it still counts and the card effect goes off like normal. This can allow you to cross borders and bring one theater of war card into another, making it a very powerful move if done correctly. There are a few catches to this, as your opponent can also flip cards and if another card is laid on top of the card, than it can no longer be flipped. Planning out your flips is tricky, but if executed correctly can be a devastating battle plan that will win you the war.

The round ends when all cards are played or one of the players surrenders the round, at first I thought surrendering would rarely happen, but after playing some rounds I can tell you it can be a smart move and only cost you a few victory points if done early. Each round, you can get a maximum of 6 victory points. In a normal game you play to 12 victory points, but this can be changed. The rounds play fast and you should have a winner in 3 or 4 rounds and approx. 20 minutes of game time. It's fast paced and fun in a small package, that doesn't take a huge space to play.


Conclusion
Priced right around $15, this is a great ice breaker or filler for 2 people to play. The artwork and quality of materials is impressive for such a low cost. It's not going to be something you want to play for a long period of time, but at 20 minutes per game it's very fun and the randomness of it will keep veterans coming back for more. 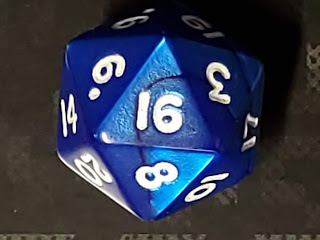 *Our Review Copy Was Provided by Arcane Wonders*
By Logicbomb