Noita is a unique 2d roguelike that instantly stood out from other upcoming releases and captured my interest. The game is currently in early access so much of it is subject to change, however there is already a lot that this game gets right. The game’s main selling point is the level of physics that it offers, however that alone is not what makes it great. It offers a fresh, challenging and unique level every play through. Most of the zones that I've been in are beautifully generated and riddled with secrets throughout.


The game design often causes you to make decisions based upon how much health you have or what your current loadout is. If you enjoy exploring caves in Terraria, Noita is that just done better and as a standalone game. Starting out the game initially is not that complicated to learn, but it might deter some by the level of difficulty that it can grow into. However, I feel that most will adapt and learn quickly.

Some people including myself have occasional performance hiccups with the game, and I did encounter a bug with a morphing potion that trapped me in a wall. That brought an abrupt end to my run, however I do not think that the bugs render the game unplayable, and they seem to be improving on these issues with each update. Speaking of updates, this is another call to praise for the game. In the three months that the game has been out it has seen many major updates with no signs of slowing. For the price that the developers are charging I think that this game is a bargain at $17.99 due to the unique experience it offers. If you do not have the money it will inevitably go on sale and I would suggest picking it up then. 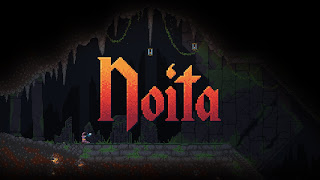