Tiny Epic Tactics is the newest addition to the Tiny Epic series, from designer Scott Almes published by Gamelyn Games. This one is hitting the shelves January 2020, but we got our Kickstarter copy in a bit early and wanted to dive in. If you are not familiar with the Tiny Epic series, they are games that have a small footprint on a table, but give you the Big Box feel. 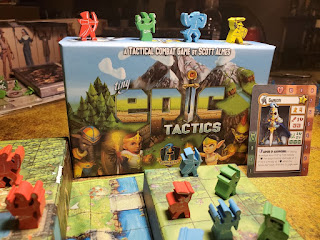 Tiny Epic Tactics is a 1-4 player game plays in about and hour It features multiple game modes. From Solo, cooperative, 2 versus 2 and Free for all. In this game you are a set of 4 adventurers. A Fighter, Ranger, Wizard and Beast. Each with a unique set of skills that will help you in claiming victory for your realm.

The Fighter is your dual-purpose melee and ranged character. Not the best at anything, but well-rounded. The Ranger is the best from a distance, but not skilled at dishing out melee damage. The Wizard is more of your ranged support style typically applying special effect on enemy characters. He can give you a tactical edge in battle. The Beast is typically your strongest melee character having the most health, but no ranged attack. Now there are exceptions to this basic explanation to the character types like the Beast, Wilf'Red Hama, he can make a ranged attack while he is in the water. Basically he is a Walrus Beast that throws a spearfish at his enemies. Each character has a unique set of skills that really give them a sense of individuality. Like Laelithar the Fighter, after he performs a melee attack all allies within 4 spaces heal 1 health. Nym the Ranger can deal extra damage when attacking from a Forest space.

The game begins with each player randomly drawing 1 of each of the previously mentioned adventurer types. After forming your party and depending on the game type. (We will be discussing a 1v1 mode) you deploy your adventurers on a cloth mat and 3d game board comprised of the game box itself and inserts included. Ascetically it looks great and reminds me of playing Final Fantasy Tactics. Anyone walking by this game will want to stop by for the Battle Realm and stay for the strategic gameplay.

Position is everything in Tiny Epic Tactics. Just as you may remember from other tactics games, elevation can give you a little extra range when performing a ranged attack, or give you a little added distance away from enemies ranged attacks. It also stops melee attacks from being performed if two adventurers are on different elevations. Other terrain elements are also present on the map as well. for example, forests, which you can hide in that gives you added defense. Towns, that when you travel through them replenish arrows, magic and restore 4 health. Portals that allow you to transverse the battlefield making no place too safe from a deadly blow.

After forming your party and deploying your characters the adventurers begins. Each player has 3 actions they can perform. The actions available are: move, melee attack, ranged attack, and lastly magic attack. Each character in the party is allowed to take 1 action each or push themselves and take 2 separate actions, but that gives them a weakened token. This stops you from activating again in a subsequent turn unless you pay 2 health to remove the weakened token. At the end of a turn in which the weakened character took no action the weakened state is removed.


Lets breakdown each action now. The move action allows you to traverse the indicated number of spaces for that character. Movement is orthogonal never moving or measuring diagonals. Melee attack, deal the listed amount of damage on your attacks and roll an indicated number of dice for each red result you push the enemy character one space, potentially dealing extra damage and even forcing them off a cliff. Interestingly enough though according to the rule book falling off a cliff or edge deals no extra damage. I feel that is a missed opportunity, but could be a balance issue. Ranged attack, allowing a ranged character to spend an arrow resource (value that is indicated on a character card) dealing that amount of damage and rolling the indicated number of dice. This time whenever a green symbol is rolled you must spend that number of extra arrows. Essentially you missed your shot. If you are unable to spend enough arrows your attack misses and no damage is dealt. The last  is the magic attack, this attack cost 1 magic (again resource on magic users) for this attack you MAY spend extra magic to roll the number of dice you powered up your attacks by (up to 3). Every blue symbol rolled adds additional effects based on your characters individual abilities.

Another important aspect of this game is the all important counter attack. After you attack an opponent's character they have the option to counter attack if possible. The counter attacks is a free out of turn attack that doesn't cost them an action, but may cost arrows or magic. Example, your Beast performs a melee attack on an enemy Ranger, after rolling your dice you push the character back 2 spaces. This attack does not do enough damage to capture him. The Ranger is out of melee range so cannot perform a  reaction attack, but is within the 4 spaces range for a ranged attack. The Ranger announces a counter attack and spends 1 of his 2 remaining arrows to do so. Then the Ranger rolls his 2 required dice and rolls 2 green symbols requiring him to spend 2 arrow resource. Oh, no! He doesn't have 2 to spend so his counter attacks fails. If he had rolled better or had more arrows he would have inflicted wounds and any other special effects.

At the end of each turn you draw a Tactics card. These cards have game changing if then statements that allow you to do things like heal wounds, gain movement or even grant extra attacks. By playing the right tactics, positioning your character and leveraging terrain elements to your advantage it will help you in maintaining dominant control of 3 different control areas across the map. Maintaining that control allows the control flag to move on a score card. Having control on the third turn in which it moves grants you 5 victory points. You also score Victory points for each of the follow: enemy character you capture grants you 2,  characters you have that are still alive grant you 2, and each character in a town grants you 1, this is all scored at the end of the game.

The Tiny Epic series hits a high note with this one! Easily the best in the series. Component quality is great. The cloth mat and boxes used for making the 3d elements are well done and include a dungeon on the inside of the boxes, which are made of thick durable cardboard. The cards are linen finished and easy to read. Tokens are good-looking, but understandably small due to the small footprint the games has. Leaving the expected downside of them sliding all over the place if you hit the table. Replay ability is at an all-time high on this one, because each game you are getting a random pool of adventurers with unique skills. Allowing you multiple ways to play gives this game something for everyone. 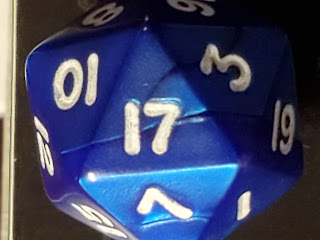