Battlestar Galactica: The Board Game - Played and Reviewed!

Battlestar Galactica is a 3-6 player sci-fi/deduction/bluffing game that takes about 2-3 hours to complete. Originally released in 2008 by Fantasy Flight games and designed by Corey Konieczka. It is important to note this review is based on a game that is over 10 years old and is long out of print. It is also important to note that we are reviewing just the base game with no expansions. 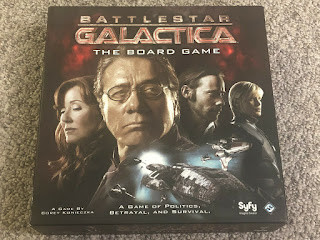 Battlestar Galactica is set in a science fiction world made popular by several television series / reboots. Players are trying to defend a Giant Space ship called the Galactica while it is trying to make it's way to Earth. During the journey you will be moving around Galactica doing actions and dealing with various crisis events. Beware though, not everyone is trying to get the Galactica to Earth. Some may be Cylons or sympathetic to them. They are trying to subtlety sabotage the teams efforts in passing crisis events. Even if the player is suspected and all players agree, it's not over yet, the Cylon could announce themselves as such and move to the Cylon command ship unlocking new Actions only available to them.

During setup, you create a deck of loyalty cards. The deck is composed of "you are not a Cylon" and "you are a Cylon" and possibly a "you are a sympathizer". The amount of each is dependent on the number of players. At the beginning of the game each player is secretly dealt one loyalty card. Players are to keep this identity hidden and only the Cylon(s) can reveal themselves if they chose.  Doing so to early will not allow you to subtlety create distrust and deplete precious resources.

On the Galactica you have 4 of these important resources. Food, Fuel, Morale and Population. Each of these in and amongst themselves are more of a way to create variation in the crisis events you will deal with. None specifically, have positives or negatives based on the current value, but if any of them were to reach zero then the Cylons win.

Crisis Events are one of the main ways resources are decreased and rarely increased. Some of these cards have specific tests that must be passed by the crew. Test are simple to understand, you are given a target number your crew must meet and a variety of colors to meet it in. The kicker is that color(s) donated to the resource pile that are not on the card actually hurt the final value and is the main way for a hidden Cylon to sabotage the ship. 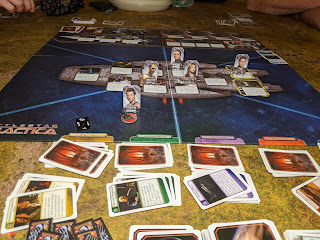 Skill cards are the way players attempt to pass crisis events, but they also provide unique powers to help in keeping the Galactica flying. At the beginning of your turn you will be drawing a certain number of cards from the set number of skills your character has. If your character doesn't have the printed skill then you simply can't gain those in this step. From leadership, political, pilot, tactical and engineer. Each card also has a printed value that is used in calculation in the crisis phase.

After you have drawn your skill cards you can move your character anywhere on the Galactica and perform one action. Either from a skill card that says Action or the action listed on your current location. These actions will help you complete tasks or ward off enemy ships like Basestars, Raiders or Heavy Raiders. These enemy ships are typically played on the board when a Crisis Event deploys them and will attack your ship. Damaging key locations on your ship that must be repaired to use its functionality. Or even board the Galactica sending Cylon troops to destroy all humans. You're not defenseless though. You also have several Vipers ready in a launching bay that you will deploy to defend your home. Biding time for the Galactica to hit the FTL.

Faster than light travel or FTL is the way the humans win. At the bottom of some crisis cards a star symbol may appear if it does then you move a FTL marker along a track. Move it enough times and the Galactica will jump moving all enemies and civilian ships traveling with you off the board, essentially clearing all threat. You could even jump early but the sooner you do the more population you risk from the fleet not being as prepared. Once you jump the Admiral draws two destiny cards and chooses one. These cards have requirements that must be fulfilled such as fuel loss morale loss etc. Also, they have a numerical value. Once the humans reach eight total distance and jump one more time they win. When the Galactica has traveled four distance all players are then given another loyalty card! You may not have been a Cylon in the beginning but you are now! This doesn't replace your old card just adds to it. Meaning if you were a Cylon, and the second card said you are not, you are still a Cylon.

There are two more roles to discuss. Admiral and President. Being the Admiral of the fleet lets you make some important decisions. Like, where are we going, how far and more. The President lets you, for an action, draw a quorum card. Giving the president unique and helpful actions during the game. Also, some Crisis events make the Admiral or President decide how to resolve them and/or change Titles with other players.

Having recently brought this one back to the table after several years of no activity I found myself reminded of past plays and fond memories. Being accused of being a Cylon by another player, heated yelling matches over loyalties, accusations flying, players attempting to throw others in the brig. I remember those times fondly and regard them as some of my fondest gaming memories of past fails and triumphs. Nothing will ever top my fondest remembrance of Battlestar Galactica. 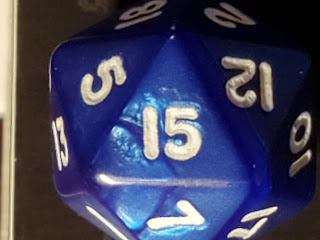